This is the first part of a series on Thomas, from John 20:24-29. The second part is available here.

The internet recently hosted a minor flurry of critical and mocking activity when a major national retailer began marketing and selling a unique pair of designer jeans – sporting a hefty $425 price tag. The selling point? The jeans come complete with fake mud on them. 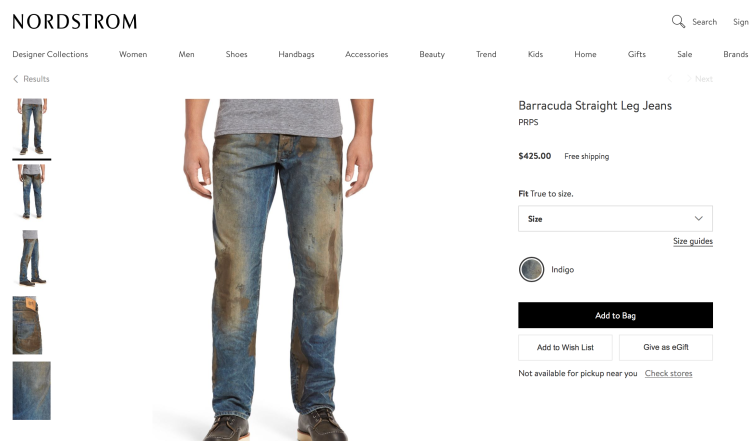 Fake mud? You just can’t make this stuff up.

The marketing idea behind this product, as best as I can tell, is that whoever buys and wears these jeans will look like they work in a blue collar job – such as in construction, the oil field, or on a farm or ranch – and that they had just spent the day working hard for their money. Apparently, the work-a-day manliness and brawn – connected, rightly, to these hard-working vocations, and idolized in truck commercials – is worthy of imitation by those who have no experience or claim to this kind of manliness whatsoever. Like the actors in the truck commercials.

I wonder if the people who pay this kind of money for these imitation work pants have ever seen mud in their lives, know what a pickup truck looks like, have ever been on a construction site, could recognize the smell of diesel fuel, or have ever handled a power tool (other than their electric toothbrush).

As I’ve pondered this odd, new cultural artifact, my mind is struck by a few different truths:

The first is that our culture’s addiction to image, coupled with a willingness and ability to pay anything for it, knows no bounds. It reveals a part of our culture that is simultaneously both unbelievably comical and deeply concerning.

Commenting on this new faux-labor product, Nebraska Senator Ben Sasse wittily placed these truths (of comedy and concern) in ironic juxtaposition in a recent Tweet, tersely stating, “America was nice while it lasted”.*

A second thought that struck me was the interesting fact that many Americans are willing to look dirty, but not get dirty.

However, I will leave those two points to blog posts of their own and land on a third: What you see is not always the real thing.

Because of this, it’s easy for us to doubt and to question – to be skeptical about things, and slow to believe everything that is put in front of us. As a rule, none of us desires to “have a fast one pulled on us,” or to get duped or tricked in a world that is all too ready to deceive.

In a strong sense, then, this element of detached self-protection is not necessarily a bad thing. In a play on the old adage: He who falls for everything will stand for nothing.

It is not a good thing to be “tossed to and fro by the waves and carried about by every wind of doctrine, by human cunning, by craftiness in deceitful schemes” (Ephesians 4:14). Jesus Himself was knowledgeable and cautious about the fickle and deceitful nature of humanity: “But Jesus on his part did not entrust himself to them, because he knew all people and needed no one to bear witness about man, for he himself knew what was in man.” (John 2:24-25)

If this is the case, then it makes me wonder why a guy like the Apostle Thomas – popularly known as “Doubting” Thomas – gets such a bad rap, when in truth, we should all identify with him in one way or another.

First of all, who was Thomas? Sparse attention is given to this almost anonymous disciple in the earliest of the three Gospels – Matthew, Mark & Luke. In each of these Synoptics, Thomas is mentioned only once – by name – in the lists of twelve disciples whom Jesus calls as His inner circle (Matthew 10:3; Mark 3:18; Luke 6:15).

In John’s Gospel, Thomas is given a few more minutes of air time. John first introduces him in the Lazarus story. Having heard the report of Lazarus’ demise, Jesus waited two days to travel to Bethany, where Lazarus and his sisters, Mary and Martha, lived. Immediately upon deciding to travel to Bethany, Jesus’ disciples throw an apparent coup: “Rabbi, the Jews were just now seeking to stone you, and are you going there again?” (John 11:8) Bethany was close to Jerusalem, so a move in that direction was a move towards harm, persecution and possible death. Then, following an exchange of words and guidance from Jesus, who was firm in His resolve to go once again to Judea to “awaken” Lazarus (verse 11), the disciples finally give in. We do not have a clear picture of how long or heated this exchange was, or what each disciple said, but John (the writer) firmly remembers the words of one man, Thomas:

“So Thomas, called the Twin, said to his fellow disciples, ‘Let us also go, that we may die with him.’” (verse 16)

It’s difficult to know what Thomas meant by this comment.

Is this skeptical sarcasm, along the lines of, “Well, I guess Jesus is crazy, and if he wants to go and die, let’s go with him and get it over with.”

Or is this dogged loyalty, along the lines of, “Okay. Jesus wants to go, and even though it looks like it will end in death for all of us, He’s the boss. Let’s roll.”

Whatever is driving Thomas’ comment (I have a hunch that it’s the latter), the incident – as handed down to us by John – seems to show Thomas as having a boots-on-the-ground, blue-collar, no-nonsense, working man’s view of the world. When the path was clear to him, he accepted it and moved forward. (He seems to have been the kind of guy who would wear jeans with real mud on them.) He probably would have done well in the military.

The second time that we hear from Thomas in John’s Gospel is at the very beginning of Jesus’ Farewell Discourse (chapters 14-17). Here, Jesus is explaining to His disciples about what life will be like after He has returned to the Father. He has told them that He is going away, will be preparing a place for them, and then will come to get them. In fact, He says, “you know the way to where I am going” (14:4). Immediately, “Thomas said to him, ‘Lord, we do not know where you are going. How can we know the way?’” (14:5) This question, of course, leads into the famous sixth verse, where Jesus reveals to His disciples that He is the Way (and the Truth, and the Life).

Underneath Thomas’ question seems to be a further picture of just who this man was: a no-nonsense, concrete, give-it-to-me-straight kind of dude. We can identify with this. If a friend invites us to their home for dinner, or we plan to rendezvous with another family at a particular campsite, it makes a lot of sense for us to have an address or location to plug into our GPS so we can actually get there. Who wouldn’t be sensible enough to ask for the endpoint of a journey, so that they can know (or at least, figure out) the way to it?

For Thomas there was a clear problem, necessitating a clear question, and presuming a clear answer.

Thomas was a man who saw things in black and white, and at this point – early in the Farewell conversation – Thomas is already confused. Perhaps he’s even frustrated by Jesus’ figures of speech: His vagueness, abstraction, and lack of clarity.

At root, Thomas seems to be a common sense, concrete thinker.

Answering another question may be helpful for us as we seek to learn about this mysterious disciples: Where was Thomas? In verse 24, we read that Thomas was not with the other disciples when Jesus appeared on Easter evening. Why was he not there? This could be a clue as to his personality, and thus the source of his famous doubt. Unfortunately, we don’t know the answer to the question. But his response to the other disciples’ report – which was no doubt marked by joy and wonder – is indicative of a man who was level-headed, perhaps skeptical or cynical, maybe even struggling and beleaguered.

Honestly, I can picture Thomas sitting at a bar, alone, nursing a drink and staring at the wall, pondering the reality of what has happened. (I’m not sure if Jerusalem had bars at the time, but you get the point.)

Do you identify with Thomas?

One thought on “Things Are Not Always as They Appear”