This is the second part of a series on Thomas, from John 20:24-29. The first part can be found here.

Two options about Thomas’ character present themselves to me here, both of which can be made to line up with the evidence. The first is that Thomas was a cautious pragmatist. Some, in fact, would read his request (to see and touch Jesus’ wounds) as hyperbole. Exaggeration. In other words, he was saying something along the lines of, “Yeah, Jesus is back from the dead…and pigs can fly.”

Perhaps, then, he doubted because of the impossibility of physical resurrection. It was outside of His experience. It seemed unreal.

If this was Thomas, then he was a level-headed skeptic, resistant to dubious claims. And rightly so. Who wants to be gullibly drawn in to believe a lie? None of us.

Yet we could alternatively read Thomas’ demand as a simple request for fairness: he was merely asking for what the other disciples had already been given. When Jesus had appeared to them on Easter evening, he “showed them his hands and his side” (verse 20). They didn’t even request this private viewing, but Christ freely offered it to them. The text is silent on whether or not they too would have shared Thomas’ hesitations if they had been absent on that Easter evening.

But Thomas seems to have been level-headed here. He knew that appearances could easily deceive and that people were gullible. He wasn’t about to be caught up in the naïveté of others.

Alternatively, I wonder if Thomas – in his doubting – was protecting Himself from pain, shame, and dashed hopes.

Perhaps he felt like the last three years of his life – walking with Jesus, serving alongside him, learning from and being taught by him – had been nothing but a waste.

Who hasn’t given themselves to something for a time of their life, only to have it end up in disappointment? A 20-year career with one company suddenly ending with an unforeseen and unexplained pink slip. A long relationship cut-off with the suprise abandonment of a spouse. An expensive investment leading you belly up into bankruptcy. Another fad diet out the window in exchange for multiple extra pounds.

Perhaps Thomas was feeling that he had given himself over to something, and it had – seemingly – come to naught. (Understand how I envisioned him at the bar in the previous post?)

Why submit himself to that kind of pain once again?

Why get his hopes up only to have them dashed a second time?

Which Thomas Are You?

Do you identify with Thomas?

Are you a cautious pragmatist? Level-headed, you live and breath common sense. You are naturally skeptical and resistant to dubious claims. You are a proud realist who relies on your experience, your senses, and your knowledge of the world as it has been presented to you. Maybe you need things to be black and white, straightforward and clear, neither cloudy nor ambiguous.

Are you a disillusioned devotee? You’ve given your heart and life over to things in the past, only to have your hopes dashed. As a result, you’ve been slow to believe, slow to trust, and slow to give yourself to anything.

Jesus Responds to Thomas with Understanding and Kindness

Verses 26-27: “Eight days later, his disciples were inside again, and Thomas was with them. Although the doors were locked, Jesus came and stood among them and said, ‘Peace be with you.’ Then he said to Thomas, ‘Put your finger here, and see my hands; and put out your hand, and place it in my side. Do not disbelieve, but believe.”

The famous painting The Incredulity of Saint Thomas (1601-02) depicts Caravaggio’s vision of this scene.* At first glance, this image can be a bit shocking, even a little gross. What it shows is a Christ who is very human – very much wounded, very physical and very present. It shows a Christ who is fully available to meet an individual in their place of need, struggle and doubt. 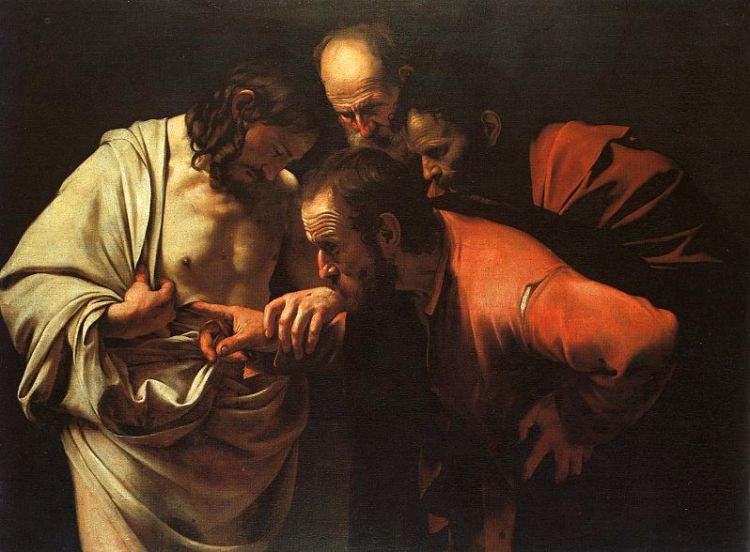 I love Jesus’ response to Thomas, because He met Thomas where he was at: in the place of his doubts and questions. He doesn’t belittle Thomas for not believing the testimony of the other disciples.

I love Jesus’ response to Thomas, because He shows that He will make place for my doubts and questions. He’s not threatened by them. They don’t anger or frustrate Him. He is real enough and powerful enough to meet me right where I’m at: in my confusions, questions, doubts, frustrations, and anger. In my obstinate hard-headedness.

Perhaps he would meet you today…right where you are at.

This is unlike any other hope that we have ever experienced.

In this world, there is always a chance that what we hope for will fail. But not with Jesus. Those who place their hope in Jesus Christ are the only ones in the entire world who are guaranteed the thing for which they hope. For Thomas, this truth became a reality when He saw the resurrected Christ. And for you and I, this truth has become a reality because of the resurrected Christ.

The text is not clear as to whether Thomas actually touched or placed his finger into Jesus’ wounds, as pictured in Caravaggio’s painting. In fact, it would seem to indicate that all Thomas needed for faith was the sight of those wounds – the sight of the crucified and risen Christ.

Yes, Jesus meets us where we are at. But He always meets us there in the cross.

John’s account is curious in its specific focus on Christ’s wounds (vv. 20, 25, 27). Why? In John 12:23, Jesus says, “The hour has come for the Son of Man to be glorified. Truly, truly, I say to you, unless a grain of wheat falls into the earth and dies, it remains alone; but if it dies, it bears much fruit.”

Here, Jesus connects His glory to His death. And Jesus’ glory is what draws people into belief.

Often, we equate Jesus’ glory with His resurrection, and rightly so. But throughout the Gospel of John, Jesus repeatedly connects His glory to the cross. This is why – for Thomas – the seeing of Jesus’ wounds is significant.

Jesus said, in John 12:32, “And I, when I am lifted up from the earth, will draw all people to myself.” Here, Jesus is talking about the magnetically soul-attracting nature of His death on the cross. It is the suffering, crucified Christ that is the object and the source of faith. This is why Paul would later say, “For I decided to know nothing except Jesus Christ and him crucified” (1 Corinthians 2:2).

The cross is the means of our salvation. The resurrection is its power.

When Thomas saw the mortally wounded – yet very much fully alive – Jesus (“a Lamb standing, as though it had been slain” [Revelation 5:6]), His faith and worship were indomitably sparked. And just as the twenty-four elders fell down around God’s throne when the Lamb took the scroll, Thomas’ response is appropriately complete and overwhelming.

Thomas never considered half-hearted, semi-committed discipleship to be an option that was offered by Jesus. For Him, belief and worship were inseparable.

Belief is to be accompanied by worship, or else it is not true belief.

Thomas says to Jesus: “My Lord and my God,” an oft-quoted utterance in arguments about Jesus’ divinity. And though the apologetic nature of this verse is quite strong, it’s not the main point of Thomas’ declaration.

Thomas first calls Jesus “my Lord,” which is a personal confession of Christ’s authority over him. Thomas was essentially calling Jesus his Master. His King. The word implies complete submission and obedience. Because Thomas’ response to Jesus was instant and complete, his life would never be the same. When his doubts are removed, he was all in.

With the Gospel, this is the norm, rather than the exception (reserved for that small percentage of super-Christians who enter into professional ministry or become career missionaries). For Thomas, as the story goes, this utter commitment sent him as the Apostle to India, where he was martyred for his witness and devotion to the crucified and risen Christ.

Thomas then confesses Jesus as “my God,” which acts as the second deity- affirming bookend to John’s Gospel (see John 1:1 & 18).** The wounds and the life together convinced Thomas that Jesus was Who He said He was. And in an instant, the blinders were removed, and Thomas really saw.

In verse 29, “Jesus said to him, ‘You have believed because you have seen me. Blessed are those who have not seen and yet have believed.’”

Like Thomas, we are given the ability to really see Christ for who He is: the Crucified King. The Suffering God.

And when we see Him, let us believe and worship.

And whether you are a cautious pragmatist or a disillusioned devotee, the call for you is to look upon Jesus – the crucified and risen One – and respond: “My Lord and my God!”

*I was first made aware of this painting by Wesley Hill in a poignant blog post.

One thought on “Seeing and Believing”